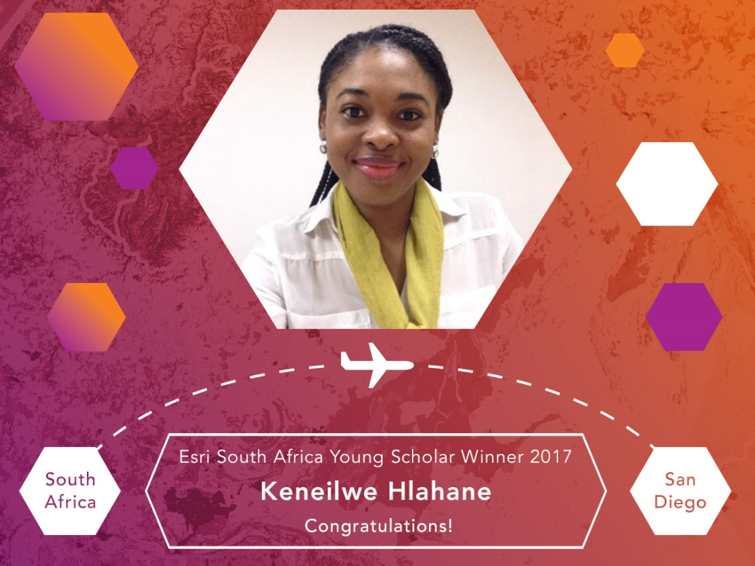 As the winning young scholar, Keneilwe will be presenting her project at the ESRI International User Conference in San Diego, United States of America, July 2017. During the Special Achievement in GIS Awards Ceremony she will formally be awarded the young scholar award. A special exhibition is organised at the conference for leading students from around the world who have shown excellence in research associated with using Esri software. Keneilwe’s work will also be displayed in the ESRI Map Gallery.

Keneilwe is working as part of the EONEMP project led by CyanoLakes (Pty) Ltd and funded by the South African Water Research Commission, and is a MSc student studying remote sensing in the Department of Oceanography, University of Cape Town. She says:

“All these achievements showcase my passion for science research. They have provided me with a platform to show how we can use Remote Sensing data in order to solve societal problems”

Keneilwe, was also selected for the best postgrad science writing 2016 competition as a Science Today candidate representing the University of Cape Town. Science Today is a magazine publication working in conjunction with the Mail and Guardian newspaper. It selects postgraduate scholars from different universities in South Africa, to publish their research work and the impact their research has on society. In her article “Every drop counts: watching water from space “, Keneilwe writes about how satellite data, obtained from MERIS satellite, is used to monitor the water quality of inland waters. Read the article here: